It’ll come as no surprise to fans of Anna Hoyle’s pun-packed paintings celebrating vintage books and collectables and the absurdities of consumer culture that humour is central to her mission as an artist. 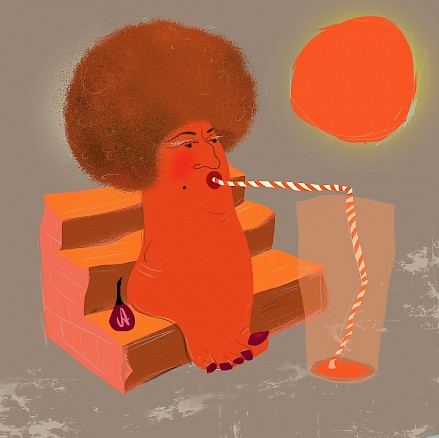 “The satisfaction for me is the ideas, and getting the ideas out with humour,” Anna says. “I love to saturate picture spaces with stuff. I collect stuff … I’m surrounded by stuff, like books, fabric, toys – everything. The satisfaction for me in drawing is getting that sense of overwhelming busyness and ridiculous chaos that we have in our world into my drawings in a humourous way, by playing with ideas.

“I love editorial work because I love conceptual stuff. Humour is really important to me. Having drawings that make people laugh and are sort of not quite right, so you have to have a second take because things are a bit weird or odd. They’re never quite odd enough for me.”

Anna studied visual arts, printmaking and fine arts, and for many years she earned her living as a fine artist via exhibition sales, prizes and commissions and occasional stints as a drawing teacher. Amongst her swag of awards is the Bendigo Art Gallery’s Robert Jacks Drawing Prize and the Art Gallery of NSW’s Dobell Prize for Drawing, in which she was a finalist. Her work has been acquired by the National Gallery of Australia, SBS and Artbank as well as private collections in Japan, Switzerland and Malaysia. Last year the University of Queensland acquired 50 of her small-scale gouache-on-paper book paintings. Think fictitious, Golden Book-style covers with dryly hilarious, unwieldly titles like Who Is Having Sex With All These Big, Beardy Folk & What Happens During Oral Sex, And Will It Affect My Eyebrows?

Despite her highly graphic style, Anna thought of herself exclusively as a fine artist until just a few years ago.  “I’ve always had an illustrative style in my work,” she says. “And I’ve always drawn. I guess I am an illustrator, that’s what I’ve done my whole life – draw draw, draw, and make stuff for people too, funny pictures.” 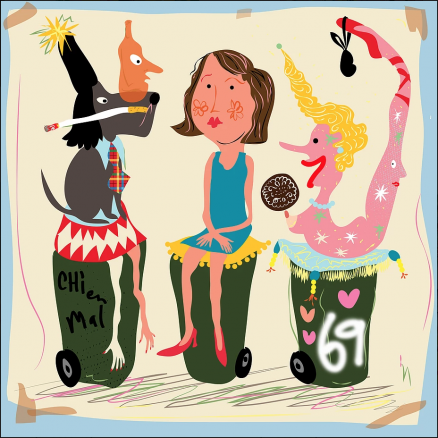 Combining fine art and illustration simply never felt feasible until she tried it. “I felt them to be separate things,” Anna recalls. “I came from a family that has a love for the graphic arts and my uncle was an illustrator. I grew up surrounded and encouraged in that world. But then I think when I was making my career choices when I was young I just didn’t get onto the right mentors beyond my family.” Nor could she see how her NQR sensibilities would fit into the ‘cute’ illustration style popular in Melbourne at that time.

Now, happily, Anna’s work is garnering international attention from the likes of Canada’s Jealous Curator and the UK’s Guardian, amongst others. In 2016 she took on her first licensing work for a US company and secured an agent in the UK, which she’s hoping will lead to more work with publishers who appreciate her darkly humourous take on the world. “I think where I’m trying to situate myself is … in more independent, probably more European style publishing, like Nobrow Press and that kind of thing,” she says. “Or for a magazine like Anorak. That darker, European, folksy feel where things aren’t quite right.”