A highlight of IA’s recent In The Know seminar was the opening address by Little Lunch creator Mitch Vane. Funny, candid and insightful, Mitch captivated the audience with tales from her stellar, 35-year career. Lessons learned? Our top five are right here. 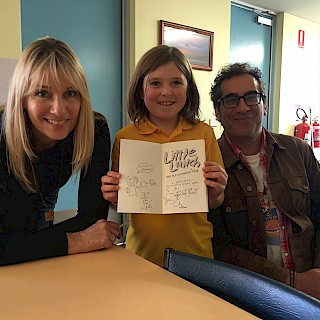 Transitioning from ad industry employee to freelance illustrator chasing editorial work in the days before the Internet meant schlepping around town, portfolio in hand, door-knocking publishers to ask for a break. It was a daunting process that taught Mitch the central lesson of her career. “It was a bit scary, but it was also a really good thing that I think we’re missing a bit now,” she said. “One-on-one is really good because you can sell your work. And I think your personality is really important when you’re selling yourself as an artist, because that person is judging your working relationship with them as well as the work that you’re doing. The way you present yourself is part of the package. You can do it to a certain extent online, and it is great and a time saver, but you can’t beat one-on-one. They’re the relationships that I made very early on that have carried right through to now, and they’re still giving me jobs.”

Mitch recalls early meetings with publishers and editors who raved about her folio but never offered her work. Others dismissed her rudely but later sent jobs her way. “If you hit a blank wall it’s not necessarily meaning they don’t like your work or they’re not going to use you,” she said. “They just haven’t made their mind up, or they’re not giving anything away. If you keep getting doors shut in your face, just ignore the door. Keep knocking.”

Even great jobs must end

Mitch concedes she eventually lost her way with a longstanding gig illustrating educational readers. “I’m not ashamed to say I probably did too many,” she said. “You’ve got kids, you’ve got to earn a living, there’s bills to pay, yes I’ll do another reader. I had a conveyor belt system going on, I was working on about three or four at a time. I was really good at it, and I loved it, but then I hit a wall.”  When a commissioning editor rang to tick her off about re-using a character from a previous book, Mitch knew it was time to stop. “It was horrible, and I was in tears and I felt really embarrassed by it, but it was a really good kick up the arse,” she said.

Mitch is big rap for life drawing classes, where she can slip out of her various signature styles and re-connect with something raw and surprising within. “I know I can draw, that’s not why I’m there,” she said. “It’s more about just letting go. It’s literally just getting stuff out on a page. By the end of the hour it’s exhausting, but stuff’s starting to come through. I think it’s really important if you’re going to do life drawing, don’t go to draw pretty pictures. Go to just find what’s there that you’ve forgotten.”

Mitch’s “other life” as an artist keeps her illustration work fresh and thriving. “This is my balance,” she says. “I just paint and draw stuff that comes into my head. I’m trying out new things, I’m jumping off cliffs, I’m taking risks, I’m showing my work at other group shows or doing my own little ones, and this is like the next phase for me.”